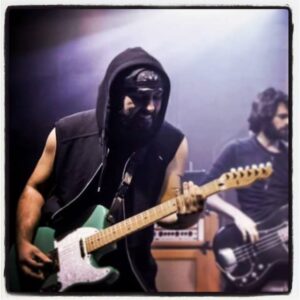 Born in 1982 in Sardinia (Italy) , I started playing guitar when I was 6 years old, taking classical guitar lessons up to 11 years. At the same time, I did the first steps as autodidact with electric guitar.

After High School, I moved to Milan to live-perform and attend the Centro Professione Musica directed by Franco Mussida (P.F.M), where I had the honor to learn from some of the best Italian guitarsts: Michele Quaini, Tony De Gruttola, Luca Colombo, Donato Begotti.

In Sardinia, I performed in several cover bands before to join Obsidjan (prog-metal). We performed in various important events and festivals (including the I-TIM Tour).

From 2003 to 2006, I performed with several cover and tribute bands, around the north of Italy (rock, hard-rock).

From 2004 to 2009, I’ve been the guitarist, composer and co-founder of the prog-metal band The One with assets of the self-produced EP “The Spark”.

In 2009, I attended in the main contest worldwide : Guitar Idol and I reached the top 15.

In 2009, I became a part of HIROFURA (untill 2013), rock-funk band from Milan, with assets of full-lenght “Continua Così” produced by Lorenzo Cazzaniga (https://www.webalice.it/lollocazzaniga/), with the videoclip of the extracted single “Continua Così”.
With HIROFURA, I opened the Elio e le storie tese live at Carroponte (Sesto San Giovanni, Milan) in front of 7000 people. We also opened The Bastards Sons Of Dioniso live and Punkreas live. In 2010, we had a double live-session at MEI (independent music fair in Faenza, Italy) both as electric and unplugged (on air on radio). https://www.hirofura.it

In 2011, I’ve been the guitarist of the project URokk, with the dj/vj Yan Agusto, wich was a rock/alternative-rock dj-set, with live guitar.

From 2012 to 2013, I performed with the alternative-rock tribute band Mustang.

Since 2013, I collaborate with rapper HEGOKID for the arrangements and recording guitars, bass, acoustic and classic guitars.

Since 2013, I’m the session player (both live and studio) for the female rock-singer Alteria (Rock TV, RnR Radio, Rai 5, Rezophonic), with whom I recordered the debut album “Encore”. We performed throughout Italy for the promotional tour (60 gigs in 1 year). www.alteria.it

-Private teacher since 2000 (one of the first in Italy, to use Skype for online teaching).

At the moment, I’m involved in the pre-production of my first album as solo artist.