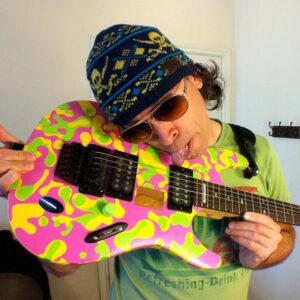 Scott Minchk grew up in Madison, Wisconsin (USA). After seeing A Flock Of Seagulls on MTV in 1981, he wanted an electric guitar more than anything! And, two years later, on his 16th birthday, his dream came true…sort of. He got a crappy Kay SG copy from a local pawn shop…it only had five strings and the electronics didn’t work. He held the headstock against the wall as he played, to make it louder in the absence of an amplifier. Sadly, the guitar was thoroughly uninspiring, and would end up back at the pawn shop just months later.
Flash forward three years to 1987, Scott still wants to play the guitar, so he goes out and buys his first “real” guitar, a brand new Ibanez RG-550…the rest is history.
Today, Scott can be found twisting knobs and trying to recreate the great guitar tones from the 70’s & 80’s on any piece of multi-effects gear he can get his hands on.
Rock on!

Find me at: www.facebook.com